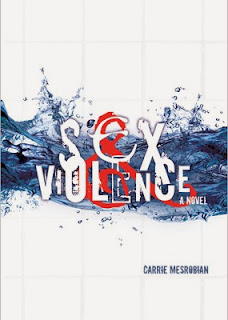 Summary from author's website: At first you don’t see the connection.  Sex has always come without consequences for seventeen-year-old Evan Carter. He has a strategy—knows the profile of The Girl Who Would Say Yes. In each new town, each new school, he can count on plenty of action before he and his father move again. Getting down is never a problem. Until he hooks up with the wrong girl and finds himself in the wrong place at very much the wrong time.
And then you can’t see anything else.  After an assault that leaves Evan bleeding and broken, his father takes him to the family cabin in rural Pearl Lake, Minnesota, so Evan’s body can heal. But what about his mind?
How do you go on, when you can’t think of one without the other? Nothing seems natural to Evan anymore. Nothing seems safe. The fear—and the guilt—are inescapable. He can’t sort out how he feels about anyone, least of all himself. Evan’s never really known another person well, and Pearl Lake is the kind of place where people know everything about each other—where there might be other reasons to talk to a girl. It’s all annoying as hell. It might also be Evan’s best shot to untangle sex and violence.

My take: I had decided to pass on Sex & Violence, because I'm overloaded with stuff to read, and because, to be honest, the title put me off a little. It's an intimidating, in-your-face kind of title. Then I read the summary (I'm not completely superficial!) and thought that sounded pretty intense too. But Heather @ The Flyleaf Review was really enthusiastic about Sex & Violence, so I gave it a try.

I'm really glad I did. Yes, there is intense stuff in this book (a brutal assault and plenty of language) but Sex & Violence is anything but an in-your-face story. It's a very understated, beautifully crafted account of both recovery and self-discovery. And yes, I see a lot of stuff like that as a reader, but not as much focused on recovery and not usually from a guy's POV. It was an interesting story that gave me a lot to think about.

Evan's father has a job that drags the two of them all over the place, from town to town and school to school. As a result, Evan is used to being the new kid, which actually works in his favor when it comes to girls. Girls, as Evan has discovered, love anything new and shiny. Evan starts secretly hooking up with Colette. She seems like just the right girl to get involved with, but ends up being the wrong one, and Evan ends up in the hospital, seriously injured.

This part of the book is a mere nineteen pages. The rest of the story deals with the aftermath of the assault, with Evan moving to a family cabin in Minnesota with his father, staying put for the first time in his life. Amidst the stillness of Pearl Lake, Evan will come to terms with what happened to him, but also with his life -- how he relates to others, how he approaches relationships, how he fits into his family. His journey is not a straightforward one, and I liked that.

Yes, sex and violence are two major themes of the book, but there are many others: nature, intimacy, motion vs. stillness, authenticity vs. superficiality. It's a very interesting story that touches on a whole bunch of issues. It's a very different take on recovery from other books I've read. If you're a reader who likes contemporary fiction that's gritty but also thoughtful and complex, definitely give this a try.