Review of The Safest Lies by Megan Miranda

Review of the Safest Lies by Megan Miranda 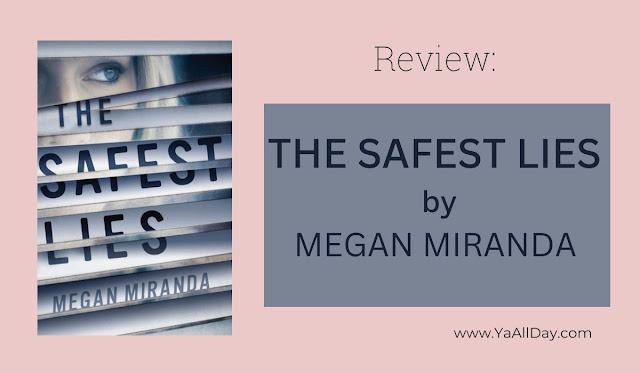 The Safest Lies by Megan Miranda

Published on May 24, 2016 by Crown Books for Young Readers 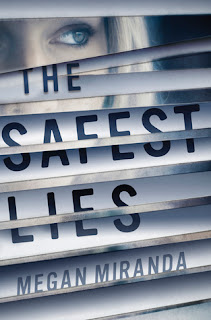 Synopsis from Goodreads: Kelsey was raised to see danger everywhere. Her mother hasn’t set foot outside their front door in seventeen years, since she escaped from her kidnappers with Kelsey growing inside her.

Kelsey knows she’s supposed to keep a low profile for their own protection, but that plan is shattered when she drives off a cliff and is rescued by volunteer firefighter and classmate Ryan Baker.

A few days later, she arrives home to face her greatest fear: her mother is missing. She and her mother have drilled for all contingencies—except this one.

Luckily, Ryan is as skilled at emergency rescues as Kelsey is at escape and evasion. To have a chance at a future, Kelsey will have to face all her darkest fears. Because someone is coming for her. And the truth about the past may end up being the most dangerous thing of all.

Review of The Safest Lies by Megan Miranda

I've enjoyed Megan Miranda's books before, especially Soulprint, so I really wanted to read this. I really like the way Miranda weaves scientific and psychological theory into her stories.

The main character of The Safest Lies, Kelsey, has grown up in an environment of fear - Kelsey's mom was abducted as a teenager and then later found, four months pregnant with Kelsey.
Now the two of them live in a fortified house with a panic room.
Kelsey's mom is afraid to leave the house, and she manages this, until Kelsey is involved in an accident that sends her to the hospital. When the accident is written up in the local paper, Kelsey's mom suddenly disappears and Kelsey is left to figure out what to do.

There was something about this book that didn't quite work for me and I'm not sure I've yet put my finger on exactly what it was. I'll try.

What I liked: the suspense that The Safest Lies is able to generate and the way it kept me guessing. I had some theories about what was actually going on with Kelsey and her mom ... but I wasn't right.

I also liked that the story poses the question as to whether fear can be inherited - an interesting idea, given Kelsey's history.
I kept thinking this idea was going to be used to make the reader wonder if Kelsey is rational or just having a huge irrational panic attack caused by her inherited fear. But that didn't feel like the case to me - I felt that Kelsey came off as a pretty levelheaded character. So I ended up feeling like the inherited fear thing didn't really go anywhere.

I had more issue with the fact that, for me, this book didn't connect all the dots by the end.
Without going into spoilers, I'll just say that a) I assumed that the inciting incident of the book would tie in better to the story. Also b) I'm not sure that certain things about Kelsey's mom's past were entirely credible. And, finally, d) though the romance in this was promising, it didn't really come together for me. I liked Ryan (the love interest) until this big revelation toward the end that seemed kind of disturbing.

Even though this was a bit of a miss for me, a lot of people in my Goodreads feed really enjoyed it, so don't let my opinion dissuade you. I remain a fan of this author -- I bought All the Missing Girls, her recently released adult book and you can read my review of All The Missing Girls.

Have you read this? If so, let me know what you thought!
YA Psychological Thriller